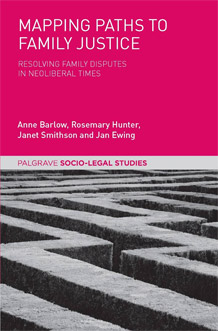 The book is based on three year ESRC-funded socio-legal research project, Mapping Paths to Family Justice, led by Exeter Law School. The project investigated the three major forms of out-of-court family dispute resolution in England and Wales. In their book, co-authors Anne Barlow (Exeter, Law), Rosemary Hunter (QMU, Law), Janet Smithson (Exeter, Psychology) and Jan Ewing (Exeter, Law) have mapped, analysed and written up the findings of their empirical study. They also consider the implications of the experiences captured in the context of ongoing neoliberal reforms to the family justice system for policy and practice.

The family justice system in England and Wales has undergone radical change over the past 20 years. A significant part of this shifting landscape has been an increasing emphasis on settling private family disputes out of court, which has been embraced by policy-makers, judges and practitioners alike and is promoted as an unqualified good.

The Mapping Paths to Family Justice Study examined the experiences of people taking part in out-of-court family dispute resolution in England and Wales. It addressed questions such as how participants' experiences match up to the ideal; how recent changes to the legal system and legal aid system have affected people's ability to access out of court dispute resolution processes and what kind of outcomes are achieved in the different processes.

The book is the first systematic study to compare the different forms of out of court family dispute resolution- mediation, solicitor negotiations and collaborative law - empirically. It analyses the findings from a nationally representative survey, individual in-depth interviews with parties and practitioners and recorded family dispute resolution processes. It considers these experiences in the context of ongoing neoliberal reforms to the family justice system, drawing out conclusions and implications for policy and practice.