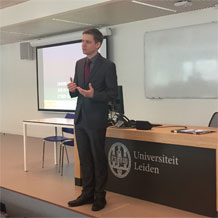 On 4 April 2019, Dr Kubo Mačák delivered a Visiting Fellow lecture entitled “Under Pressure: Jus in Bello Norms and Cyber Operations” at the Leiden University’s campus in The Hague, the Netherlands.

In the lecture, Dr Mačák discussed the challenges that modern cyber operations pose to the oldest branch of international law: the law of armed conflict (also known as the jus in bello or international humanitarian law). Overall, the lecture explored the central question whether a tipping point has been reached at which the norms of jus in bello are breaking under the pressure of cyber conflict.

Dr Mačák started out by responding to the view advanced by some States that jus in bello does not apply in cyberspace at all. Endorsing instead a pro-applicability approach, he then considered specific issues at the intersection of jus in bello and cyber operations that arise already in peacetime; at the threshold of an armed conflict; and while an armed conflict is underway. The selection of these topics was based on the ESRC-funded research project “International Cyber Law in Practice” led by Dr Mačák.

The lecture was delivered as part of Dr Mačák’s visiting fellowship at the Hague Program for Cyber Norms, a research group at the Leiden University that focusses on the development and implementation of cyber norms. The Program is funded by the Dutch Ministry of Foreign Affairs and is part of a continuing commitment by the Netherlands to support development of international norms and understanding with regard to the development and use of ICTs and related new technologies, following the Global Conference on Cyber Space (GCCS) hosted in The Hague in 2015.