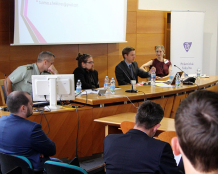 Exeter academics speak at a conference on hybrid warfare

On 24–25 May 2018, Palacký University in Olomouc, Czechia, hosted an international conference on the theme “Responding to Hybrid Threats by Force: International and National Law Aspects”. Two Exeter academics contributed to the event.

Dr Aurel Sari gave the opening keynote lecture on 24 May 2018. Speaking on the “Legal Dynamics of Hybrid Warfare”, Dr Sari suggested that the instrumentalisation of law and legal arguments constitutes the defining legal feature of hybrid threats. Hybrid adversaries utilise the law to create an asymmetric legal environment that favours their own strategic objectives and places their targets at a disadvantage. Whilst the notion of lawfare captures one aspect of these dynamics, it does not describe all of the legal challenges posed by hybrid threats. Dr Sari suggested that nations facing hybrid threats should adopt a legal resilience perspective, as this offers a more effective framework for countering the legal challenges arising in the contemporary security environment.

Later that same day, Dr Kubo Mačák chaired a panel on the grey zones in hybrid warfare with speakers from the United States and Czechia. On 25 May 2018, Dr Mačák then spoke on “Urban Warfare and the Changing Nature of Combatancy”. In his talk, he explored the extent to which sometimes decades-old treaty-based rules of international humanitarian law may be adapted to the contemporary reality of urban conflict. In particular, he argued that the exception from the strict requirement of distinction codified in Article 44(3) of Additional Protocol I may under limited circumstances be available to combatants who find themselves in enemy-controlled battlespace in the urban environment.