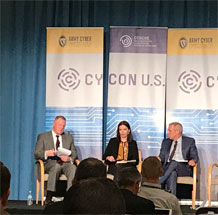 Exeter Law School’s Professor Mike Schmitt has completed a six-week journey training government officials on how international law governs hostile cyber operations. He began the trip in Washington at the Annual Cyber Conflict Conference sponsored by the US Military Academy at West Point and the NATO Cooperative Cyber Defence Center of Excellence. The conference brings together hundreds of senior cyber experts from around the world to consider the challenges posed to international security by malicious cyber operations launched by States and non-State actors, such as terrorist groups. Professor Schmitt addressed the conference on how such operations violate the sovereignty of the State into which they are conducted. In addition to his Chair at Exeter Law School, he serves as the Francis Levie Distinguished Scholar at West Point and is a Senior Fellow at the NATO Center.

From there he traveled to Mexico City where he directed a week-long seminar on cyber law for Mexican government officials. The workshop included topics ranging from jurisdiction over remotely conducted criminal cyber activity to the limitations on cyber operations during armed conflicts such as those in Syria and Ukraine. The event was sponsored by the Organization of American States, the Dutch Ministry of Foreign Affairs, and the Mexican government. The following week he conducted the same seminar in Panama City for officials from throughout Central and South America under the auspices of the OAS, Dutch MFA and the Panamanian government.

From Panama, he was off to Harvard University where he participated in a workshop on the use of artificial intelligence during armed conflict that brought together lawyers and technologists from government, academia, the private sector and non-governmental organizations. The workshop was convened by Harvard Law School, where Professor Schmitt is an Affiliate of the Program on Law and Armed Conflict, the US Naval War College, where he is the Howard Levie Professor, and the International Committee of the Red Cross.

Later in the week he conducted training sessions on international cyber law for generals and admirals assigned to NATO’s Supreme Headquarters in Belgium. The training included a private session with NATO’s Deputy Commander, General Sir James Everard, to discuss the challenges of responding to hostile cyber operations against the Alliance and its members.

Professor Schmitt completed his travels in Canberra where he led a week-long workshop on cyber law for officials from Pacific Island States. The seminar was organized by the Australia’s Department of Foreign Affairs and Trade, the Dutch Ministry of Foreign Affairs, and Singapore’s Cyber Security Agency.

In 2019, he will continue his globetrotting with more training for officials in venues ranging from Germany and Switzerland to Indonesia and Singapore. The workshop are based on a seven-year research project he led examining the applicability of international law in cyberspace that led to the 2017 publication of Tallinn Manual 2.0 on the international Law Applicable to Cyber Operations. In that year, he was awarded the Order of the Cross of Terra Mariana by the President of Estonia for his work on the project and other contributions to cyber security and stability.