Inspired Villages – which owns Millbrook retirement village in Exeter – has granted a special wish for resident and trailblazer Moira Vickerman. Moira, aged 87, has visited her alma mater, the University of Exeter – where she was the first female president of the university’s law society from 1957-58.

Moira’s wish was granted as part of Inspired Villages’ ‘Retired? No, Inspired’ campaign, which is helping residents to achieve their long-held dreams. The campaign aims to show how your later years can be the best of your life because you finally have the freedom from work and family commitments to do the things you’ve not had the chance to do before.

When Moira returned to the university as a special guest, she met Head of Law, Sue Prince; Alumni Officer, Alison Gordon; and three of the University of Exeter Law Society Committee members, Rawan, Nathaniel and Nicole. The students presented her with a lifetime membership for the University of Exeter Law Society, and also a society sweatshirt featuring her name and the year she was president.

Moira said: “It was amazing to go back to the university because I hadn’t been there for years and years. It’s so built up now. When I was a student, I lived at Lopes Hall, and that building is still there. I also enjoyed meeting the students and Professor Sue Prince. I’m very grateful to Inspired Villages for organising my visit.”

Born in London, Moira (whose surname then was Dutton) was determined to go to university, and when she began her three-year law degree in the 1950s, the University of Exeter was part of the University of London. She said: “It was unusual for a woman to go to university then, and I chose Exeter because I would be going away from home but still doing a London degree. I enjoyed studying law and it was very useful to me.”

To illustrate the different attitudes to women in higher education at that time, Moira recalled how a male professor never recognised the fact he had a woman in his class. “He would call everyone gentleman,” she said.

However, Moira got on well with the male students in her class, who voted for her to become the first female president of the university’s law society. Moira said: “I made some good friends, and I was accepted by the men on my course, who voted for me to be president. But my professor walked out of the celebratory tea in disgust because I’d been voted in.”

As the society president from 1957-58, Moira organised events and talks for the law students. “People were so amazed a woman was president of the law society,” she said. “It was such a different world in those days.”

Moira graduated in 1958 and went on to work for a refugee organisation in Germany, and in 1961 she married Keith Vickerman, who she’d met at Exeter whilst he was studying for his PhD in Zoology. Keith, who died in 2016, was a distinguished biological scientist and professor of zoology. Moira and Keith adopted a daughter, Louise Vickerman, who is Principal Harpist of the Utah Symphony in the U.S.

Looking back to her graduation day, Moira recalled her ‘eye’ for fashion: “Our gowns had purple hoods, and because coloured eyeshadow had recently come in, I managed to find some that was the same colour as my hood. People were fascinated by this.”

Tom Lord, COO at Inspired Villages, commented: “It’s fantastic we’ve been able to help Moira and other Inspired residents realise their long-held dreams. Moira blazed a trail for women in higher education and she should be proud of what she’s achieved. At Inspired, we’re all about helping people make the most of retirement and discovering what brings them joy.”

Nathaniel & Rawan, Co-presidents of UELS were delighted to have hosted Moira, enjoying hearing her stories of life as a student over tea in the Moot Court and then taking her on a tour of the campus.

"Getting to meet Moira was a fantastic opportunity. It was so fascinating to hear her stories about studying Law at Exeter in the 1950s and how she was one of the only women to do so at the time, let alone be elected as President of the Law Society! Alongside telling her about what Law at Exeter is like today as well as what the Law Society does over tea, we gave her some of her own UELS stash with her year of study on it and had a wonderful tour around campus with her as well, where she recounted her experience when we visited her old accommodation at Lopes which is still standing. It was an overall rewarding and unforgettable experience! A huge thanks to everyone who was involved with organising it! 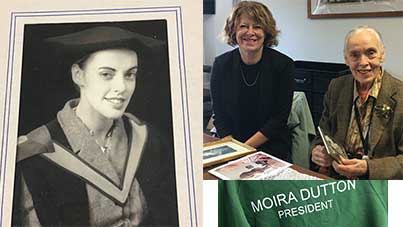