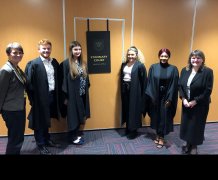 The standard and level of advocacy were above and beyond expectations and this was recognised by the judges.

The last week of term saw the first-ever set of mooting sessions hosted by Flamank Law Society take place. We were lucky enough to welcome Christian Waterfield and Catherine Whitford as the judges for the two sessions. Four teams took part in the moots and each term consisted of two barristers and three solicitors. The students were fantastic in their individual submissions and it was evident that a lot of hard work and practice had gone into the preparation for the sessions. Thank you to all the students who took part, we were particularly impressed by the courage, grit and determination they all showed. We are looking forward to the next set of sessions already! We would also like to thank BPP and OUP for their kind lending of the mooting problem for the sessions.

Anton Doyle and Leonie Stussi, Mooting Officers, commented ‘As the first set of mooting sessions, ever, here at Penryn have come to an end, we can honestly say the standard and level of advocacy was above and beyond expectations and this was recognised by the judges. As mooting officers, it is a satisfying spectacle to see the preparation, hard work and dedication from the advocates pay off. We would like to thank the Judges: Christian and Catherine who kindly took the time out of their busy schedules to judge the moots. Finally, we would also like to thank Lexie for all of the hard work she put in, as there would have been no mooting sessions without her help and it will be sad to see her leave, but hopefully, we will see Lexie in the near future. From everyone at Flamank: Merry Christmas and a happy new year, and we hope to see more new faces at future mooting sessions. Keep an eye out for future opportunities!’

Dan Carnegie, President of the Flamank Law Society commented 'I thought the first stage of the mooting was a complete success and all credit to Anton and Leonie to organising it all. It was evident how hard all the teams worked in order to put forth their case. Considering it was everyone’s first attempt at mooting it was conducted phenomenally, it appeared as though many of the barristers, I witnessed, had done it many times before and looked incredibly confident in doing so. I am truly excited to see the next moot and hopefully, it will be just as successful as this one.'