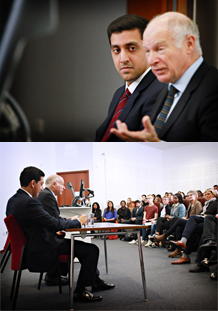 The former President of the Supreme Court and University of Exeter graduate have teamed up to help inspire the next generation to work towards their dream career.

Lord Neuberger has visited a school and sixth form college to explain what it is lawyers and judges do, what the rule of law is and to inspire pupils. The peer, who presided over the highest court in the country, gave the teenagers valuable advice along with Ammar Khan, a recent graduate he befriended.

The pair visited and Academy in Yorkshire, a Sixth Form in the Midlands and two universities - Bradford and Aston - where they spoke to pupils. The two became friends after a work placement at the Supreme Court. Whilst there Ammar asked Lord Neuberger whether he’d address students at the University of Exeter in January 2016. Lord Neuberger became an honorary graduate of the University of Exeter in 2017.

During the events for pupils Lord Neuberger was interviewed by Ammar and then the two took questions from the audience.

Ammar said: “We are both passionate about helping younger people to think about all the opportunities open to them. Many have ambitions, but they might not be clear about the path to get there, and I hope we have helped give them useful information, and perhaps some inspiration.”

Ammar, who is from Dudley, graduated last year from the University of Exeter and is about to begin training as a solicitor in London at a global top 10 law firm. While a student he arranged work experience with some of the country’s most successful lawyers.

Lord Neuberger said: “I have always thought that it was important for those with responsible and influential jobs to visit schools and universities to explain what they do and why they do it. It helps pupils and students understand how the world which they live in works, and it gives them information about career opportunities. So, when Ammar Khan, who recently graduated from Exeter and is embarking on a career as a solicitor, suggested that he and I visit some schools and universities together, I agreed.”

More information, and videos about the project can be found on twitter.com/Access2lawyers1 and the hashtag #meetalawyer.