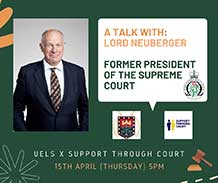 Lord Neuberger holds an honorary degree from University of Exeter, awarded in 2017

On April 15th the University of Exeter Law Society was honoured to invite Lord Neuberger to speak with us and answer our questions. The event was in honour of Support Through Court a charity which aids the most vulnerable in our society in gaining legal aid and support. One of the Society’s Pro Bono Fundraising Teams put together the event with Lord Neuberger as our speaker due to his position as patron of the charity.

Our speaker, Lord Neuberger has led a celebrated and successful career in the legal field, cumulating in his appointment as President of the Supreme Court for England and Wales from 2012 to 2017. He began his journey by reading Chemistry and then working as a investment banker before stepping into the legal world. Lord Neuberger started his judicial career within the High Court in the Chancery Division and following this in 2007 he was promoted to be a Law Lord. Since his retirement from the Supreme Court in 2017, he has practised as an arbitrator and legal expert from One Essex Court.

Attendees were treated to a wonderful lecture by Lord Neuberger where he covered his thoughts on the rule of law, constitutional changes in England and Wales in the last 50 years and his journey into a career in law. The floor was then opened to questions where we heard Lord Neuberger’s opinion on a range of topics including, whether lockdown is a curb on our freedoms, whether the legal field is doing enough to achieve diversity and how to balance political neutrality in heavily political cases such as R v Miller.