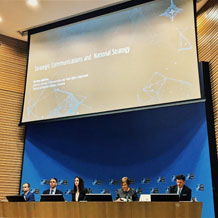 Launch of report on hybrid threats

On 11 April, Dr Aurel Sari contributed to the launch of a report on hybrid threats at NATO Headquarters in Brussels. The report is the product of a two-year research project undertaken by the NATO Strategic Communications Centre of Excellence at the request of the Lithuanian and Estonian governments.

Entitled “Hybrid Threats: A Strategic Communications Perspective”, the report aims to deepen our understanding of the diverse range of measures which are often described as “hybrid threats” in current policy debates. The report adopts a standardised framework to analyse a set of case-studies chosen to provide a detailed, “360-degree” view of hybrid threats. The main volume of the report offers a summary of 30 case-studies, ranging from Chinese public diplomacy in Taiwan and violations of Finnish airspace to the South Stream pipeline and criminal networks in Donbas. A further 10 case-studies are discussed in greater detail in a separate annex.

At the launch event in Brussels, Dr Sari introduced a case-study on the use of humanitarian assets by the Russian Federation in the context of the Russian–Georgian war of 2008. The research underpinning the case-study suggests that Russia employed humanitarian aid in an instrumental fashion in support of its foreign policy objectives. In particular, Russia relied on humanitarian aid and narratives in an effort to portray itself as a neutral and impartial actor in Georgian politics, as a justification for actions condemned as unlawful interference by the Georgian authorities and to claim that Georgia itself was in breach of its international obligations. The report, including the Russian–Georgian case-study, is available here.