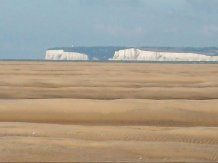 Goodwin Sands is a famous hotspot for shipwrecks and military aircraft.

Campaigners trying to stop a Battle of Britain site from being dredged are hoping to launch a new High Court bid to protect archaeological finds and wildlife at the site.

Goodwin Sands is a famous hotspot for shipwrecks and military aircraft, estimated to be the final resting place for over thousands of sailors and aircrew as well as wrecked ships.

Campaigners have joined forces with University of Exeter marine law expert, Josh Martin, to challenge the High Court decision to allow dredging. They have launched a new crowdfunding initiative, so they can instruct a barrister and bring a case for judicial review, where the decision to award the dredging licence can be reviewed.

Mr Martin, an expert in underwater cultural heritage law, will be sharing his expertise with campaigners. He said: “I think they have a good case and I am very hopeful that they are successful in securing the funding so that remaining questions about the potential cultural and ecological impacts can be properly examined in a court of law.”

The Marine Management Organisation (MMO) granted a licence for dredging Goodwin Sands, near Dover, in July 2018, before the process of deciding if could be given new status as a Marine Conservation Zone, as part of the government’s ‘Blue Belt’ programme, had finished.

The new licence will permit Dover Harbour Board (DHB) to dredge up to three million tonnes of sand. Protestors are concerned about the impact on the environment. Their two year campaign against dredging in the area has led to three public consultations that collectively received over 1,300 responses.

The dredging licence was given after the developer pledged to protect sites of archaeological interest with a 25-metre exclusion zone, gave assurances that the local seal population would not be impacted and said wildlife would be able to recover following the dredging process.

But campaigners feel the 25-metre exclusion zone is not sufficient because of the unstable nature of the sandbanks and the potential size of archaeological materials.

Campaigner Joanna Thomson said: “The Goodwin Sands are not just a mass war grave from the Battle of Britain and a shipwreck hotspot, but the environment provides excellent preservation for the heritage within.

“The sandbanks are also a highly dynamic environment, which means that archaeological objects could become suddenly exposed or impacted. We remain concerned about the impact on the local seal population, seabirds, benthic ecosystem, and on local fisheries.”

Martin said: “The Government is required to take precautions and prioritise public concerns about protecting their natural and cultural heritage for future generations. In this case there are still just too many unknowns.

“I feel there has been a lack of detailed assessment of alternative dredging sites - which licence applicants are required to do by law.  It seems that there are other sites which would have far less impact on the UK’s heritage but as is unfortunately too often the case, it all boiled down simply to a question of cost.”