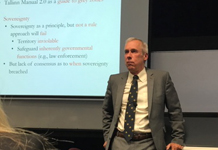 In recognition of his status as the global thought-leader in international cyber law, he was appointed to the inaugural Advisory Board of the newly established CyberPeace Institute (CPI), an institution dedicated to enhancing the stability of cyberspace by decreasing the frequency, impact, and scale of cyber-attacks.

The Institute’s initiating funders are Mastercard, Microsoft and the Hewlett Foundation, with additional support from other major corporations and philanthropic institutions.

In 1996, Professor Schmitt graduated 1st in class from the programme. He went on to serve there as both a military professor and, later, the Charles H. Stockton Visiting Professor of Law. A decade ago he returned to head the college’s Stockton Center for the Study of International Law, occupying the Howard S. Levie Chair of Law. Last year he was named the Naval War College’s Research Scholar of the Year for 2018.

Professor Schmitt will continue to serve as General Editor of the Stockton Center’s journal, International Law Studies, which is the oldest international law journal in the country and one of the most influential among government legal policy makers in the US and abroad.