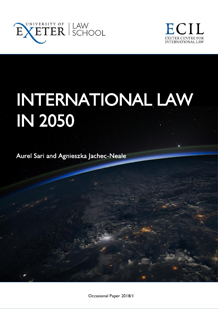 The future of international law in 2050

Predicting the future is an uncertain business, especially at such a distant point in time as thirty years from now. For example, in 1959, few would have foreseen the collapse of communism in Eastern Europe or the fall of the Berlin Wall, which at that point had not even been built yet. We are not very good at predicting specific historic events. However, we can identify trends and drivers that are likely to shape the future and draw certain conclusions from that. For instance, there is little doubt that environmental degradation will have significant ecological impacts which, in turn, will leave their mark on human societies over the next thirty years.

The findings of the occasional paper are drawn from a research project on the future development of the law commissioned by the Development, Concepts and Doctrine Centre of the United Kingdom Ministry of Defence in 2017. The research was carried out at Exeter Law School by a group of experts consisting of Catherine Caine, Matthew Channon, Hitoshi Nasu, Michael Schmitt and Helena Wray, led by Aurel Sari and Agnieszka Jachec-Neale.

The paper also draws on the outcome of a workshop hosted by the Exeter Centre for International Law in March 2018 to discuss these research findings. The workshop was meant to capture a range of views and the discussions were not always conclusive. No consensus emerged, for example, as to what the international legal system will look like in 2050. Indeed, the workshop demonstrated that there is ample room for alternative interpretations and diverging visions of the evolution of the international legal system over the next three decades. The event was supported by the Economic and Social Research Council.