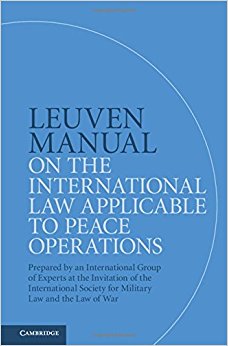 The Leuven Manual on the International Law of Peace Operations

Peacekeeping operations are a well-established feature of international relations. Yet despite the large number of missions deployed over many decades, peacekeeping continues to pose numerous legal challenges. Multinational military operations are exceedingly complex undertakings and the application of the law is fraught with difficulties.

Against this background, in 2011 the International Society for Military Law and the Law of War decided to launch a research project to produce a manual on the law of peace operations. Dr Aurel Sari, Director of the Exeter Centre for International Law, recalls the early days of the project:

“There was little doubt in our minds that authoritative guidance on the law applicable to peacekeeping missions was sorely needed. However, writing a manual proved to be a formidable task. The range of topics involved is vast. The practice of international organisations is far from consistent and the law itself remains unsettled in many areas.”

Eventually, it took a group of close to 30 experts and observers six years to complete the text. During this period, members of the group and the project management team came together to work on the draft in locations including Cameroon, Canada, China, Italy and Peru. The result of these efforts is the Leuven Manual on the International Law Applicable to Peace Operations, the first detailed guide to the areas of international law relevant to the planning and conduct of peace operations.

The Leuven Manual is intended to provide an authoritative restatement of the applicable law. The law is set out in the form of 145 ‘black-letter rules’. These rules reflect the consensus of the participating experts and were drawn up with the input of observers from the United Nations, the International Committee of the Red Cross, NATO, the EU and other regional organisations and arrangements. Each black-letter rule is accompanied by commentaries which explore the interpretation and application of the rules in greater depth. In addition to restating the law, the black-letter rules and commentaries also identify best practices. The rules are presented in 21 chapters and deal with subjects ranging from the mandate and establishment of peace operations to the promotion of the rule of law, the protection of civilians and third party claims.

Dr Sari, who acted as a member of the group of experts and advisor to the project management team, commented:

“The Leuven Manual is an extraordinary resource for both scholars and practitioners. Here we have, for the first time, the key rules applicable to peace operations all set out in a single, accessible volume. Not only that, but the Manual also offers guidance in the form of best practices in areas where the law is uncertain or underdeveloped.”

The Leuven Manual on the International Law Applicable to Peace Operations was published on 28 December 2017. The University of Exeter was one of sixteen institutions and organisations that supported the preparation of the Manual.