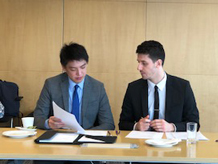 16 Canadian law students took part, with teams representing the University of Kent, University of Sussex, Queen Marys University London, City University, University of Southampton, University of York, University of Leeds and University of Exeter, in a knock-out competition which was judged by panels of law tutors and Dentons' trainees. The aim of the annual competition is to encourage the development of negotiation skills through simulated exercises focusing on Canadian human rights and ethics. The heats required strong problem-solving skills, excellent communication and co-operation; all qualities valued highly in global business and legal employment.

Sue Prince, Law Associate Professor, organised and led the event and Tia Matt, Lecturer in Law wrote the scenarios and acted as senior judge.  This is the third year of the competition which has been organised by Exeter since its inception as a means of encouraging Canadian students to apply their legal knowledge within the political and cultural context of their homeland.  It is hosted at Dentons London Office which overlook the Old Bailey and St Pauls Cathedral, in the centre of legal London.  The corporate setting informs the professional approach that is taken by all of the competing students.  In the final heat, the Exeter students had to negotiate against a team from City University, over a difficult ethical human rights problem, concerning the potential construction of a dam on indigenous burial and ceremonial grounds in Western Canada, in front of an audience of other competing students.