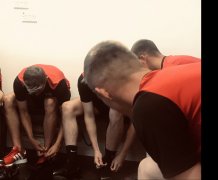 The pioneering programme trains football coaches to act as role models and intervene when they witness unacceptable locker room behaviour.

Victims Commissioner Dame Vera Baird has praised a pioneering University of Exeter programme which trains football coaches to act as role models and intervene when they witness unacceptable behaviour or language in the locker room.

It is hoped the course, developed to support people to challenge toxic locker room culture, will be rolled out at sports and football clubs across the country after a successful pilot.

Football Onside trains people to be 'active bystanders' and intervene positively in potentially harmful situations. The training helps demonstrate to people safely and calmly that their actions or behaviour are wrong. This also then sends a message to others that the behaviour is unacceptable.

Coaches and staff at Exeter CITY Community Trust – which delivers wellbeing programmes for all ages and runs youth football teams - has been the first sports’ organisation in the UK to receive the training, alongside Exeter City Academy, Devon FA staff, Exeter College football coaching foundation degree students and Exeter NCS staff. The training is backed by the Devon Rape Crisis and Sexual Abuse Service and the Hollie Gazzard Trust.

The training was delivered by experts in three two-hour sessions, where the 34 participants discussed and learned about sexual violence, domestic abuse, the law and safeguarding, bystander behaviour, consent, social norms and problematic masculinity.

Analysis shows those who took part were then less likely to believe rape and domestic abuse myths, and to exonerate the perpetrator or think that the victim lied. They were significantly more likely to want to help when they witnessed unacceptable situations because they felt more empowered, and more knowledgeable about the law.

Before the training 52 per cent said they would signal their disapproval at sexist comments or jokes through saying something, or by their body language. After the course this rose to 90 per cent.

After the training 84 per cent of participants said they would verbally challenge sexist comments or jokes, compared to 40 per cent of those questioned before they started the course.

People who took part in the course said they were more likely to be confident to speak up when they saw someone swearing at their partner – 63 per cent before the course and 84 per cent afterwards.

The analysis was conducted via interviews, questionnaires and focus groups.

Research has revealed that when one person intervenes it changes the ‘group norm’ and shows others it's okay to speak up, deterring would be perpetrators from harmful behaviour since they fear being pulled up on it.

This project emerges at a critical moment – violence against women and girls has been thrown into the spotlight by recent campaigns like #MeToo and #Times Up and is increasingly recognised as a global public health and human rights issue.

Dr Fenton said: ‘Bystander intervention is about empowering all members of the community to speak up and challenge gender inequality and the drivers of violence against women. It’s about helping people to find their own way to make an impact and make a difference. When nobody speaks up this empowers people to continue their unacceptable behaviour.”

The training has been developed following the success of The Intervention Initiative, a programme developed by Dr Fenton for universities across the country, in which participants are trained to notice and intervene to prevent sexual and domestic abuse or violence against women and girls.

Dr Fenton said: ‘Football and sport present a particular opportunity for positive bystander work to challenge behaviours given the way in which high profile players and coaches commonly act as role models, especially for younger people.

‘It is precisely this capacity for changing culture, through positive example, that this project seeks to harness through the collaboration with Exeter CITY Community Trust.

Jamie Vittles, chief executive of Exeter CITY Community Trust, said: “Our staff are in contact with more than 45,000 young people across the south west and our coaches are often seen as important role models by the young players they work with.

“Training coaches to model positive bystander behaviour is a great way to contribute to the kind of culture change we’d like to see in football and other sports – one of mutual respect where violence and abuse, including the jokes and comments that go along with it, become unacceptable.”

Scott Walker, deputy head of community at CITY Community Trust, who has taken the course, said: “It has enabled me and others on the course to be able to make a positive impact and has given us the tools and understanding to do that in an appropriate way. I think it’s important to remember that this is not a problem that relates just to football, or even to sport, it is a problem that exists throughout our society.

‘Our coaches and staff at CITY Community Trust are role models for young people, and this training means they can help influence those youngsters in a really positive way and step in when they see inappropriate behaviour or language. So much of this is about raising awareness and helping people understand the issues and giving them the knowledge they need to step in and prevent these behaviours.

‘We will never put an end to sexual or domestic violence, but through positive behaviour and mentoring and initiatives like this we can all play a part in reducing it. As a young footballer I know I would have found it very difficult to speak out in an uncomfortable situation, this initiative means that that others may not find it so difficult and can change things for the better.”

University of Exeter student Charles Gray, who works on CITY Community Trust’s National Citizens Service programme, has taken part in the course and says it helped to give him the knowledge and understanding of when to intervene in difficult situations.

Charles said: “I am certain that at some stage in the future I will be in a situation where I will need to call on this training and use some of the constructive skills and tactics that it taught us. The themes that were carried through the training can certainly be applied to any part of life and really just give the ‘bystander’ the confidence to intervene in the most effective and appropriate way possible.

“It’s really important that we tackle these problems as a society and that can start with young people. We need to start breaking down the stereotypes and cultures that have built up over time.”

Fee Scott, chief executive of Devon Rape Crisis and Sexual Abuse Services, welcomed the initiative. She said: “We see far too many women who have experienced serious sexual violence in our community, and it is clear that this is directly linked to the way that women are viewed and portrayed in our society.

“We are clear that gender inequality is both the cause and consequence of sexual violence and we are keen to be involved in any programme that is challenging damaging cultural messages about the roles, functions and status or women.  Football Onside is taking these challenges into the sporting world and we were delighted that so many men came forward to be part of the programme.”

Lara Snowdon, Health and Wellbeing manager at Public Health England South West, said: “Preventing violence is everyone’s business. The Football Onside approach is designed to empower the community at football and sports clubs to safely and constructively intervene when they recognise behaviour that may cause or encourage violence. Public Health England is proud to partner with the University of Exeter, Exeter City Community Trust, Devon County Council, Devon Rape Crisis and Sexual Abuse Service, and the Hollie Gazzard Trust to pilot this intervention which is at the forefront of developing the evidence base for bystander interventions in the UK.

“The statistics show that there is a significant problem with sexual abuse and harassment in universities with some figures showing that it is twice as prevalent on campus as in the wider community. The victims are most likely to be young women, many of whom are away from home for the first time and hoping to make the most of the opportunities university offers. Unfortunately, this invaluable experience can be interrupted and even ended altogether because of the devastating impact of rape or abuse and I very much welcome Exeter’s work to challenge and change the culture that allows this behaviour to go on.

“We know that sport can be a great force for good but, in the past, it has sometimes been another environment where this culture has gone unchecked.  Football Onside is a positive collaboration between the University, football club and the wider community and a great start to raising awareness of how damaging sexist attitudes can be as well as empowering more people to intervene when they see damaging behaviour.

“I welcome these schemes and would like to see more activity like this which help to tackle the scourge of sexual abuse both on campus and in the wider community.”

View gallery of photos from the launch.