When is a wedding not a marriage? Exploring non-legally binding ceremonies 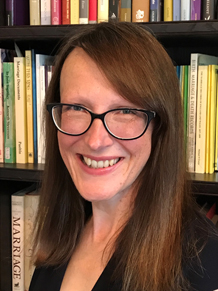 I have a particular interest in family law and legal history. I have written on all aspects of modern family law, but the focus of my research is on the history and current law of marriage, cohabitation, bigamy, and divorce.

In 2015 I was seconded to the Law Commission to work on their scoping paper Getting Married (published in December 2015) and from August 2019 to July 2022 I acted as specialist advisor to the Commission on their Weddings Project. From September 2020 to March 2022 I was also a co-investigator on a Nuffield-funded project on non-legally binding wedding ceremonies led by Dr Rajnaara Akhtar investigating why marriage ceremonies occur outside the legal framework in England and Wales.

I regularly give talks to groups of family historians, and have appeared on programmes such as Who Do You Think You Are? and A House Through Time to unravel tricky points of legal history relating to divorce and bigamy.

My research interests lie in the overlapping areas of marriage, cohabitation, bigamy and divorce.

My first monograph, Marriage Law and Practice in the Long Eighteenth Century: A Reassessment (Cambridge University Press, 2009) looks at how couples married in eighteenth-century England (shattering a few myths about common-law marriage, broomstick weddings and hand-fasting along the way). My second, The Legal Regulation of Cohabitation: From Fornicators to Family, 1600-2010 (Cambridge University Press, 2012) demonstrated the rarity of cohabitation in earlier centuries and how the common-law marriage myth only emerged in the 1970s. I have just completed a third monograph, Tying the Knot: The Formation of Marriage 1836-2020, which will be published by Cambridge University Press in October 2021. My next monograph will be an exploration of bigamy in England and Wales from the seventeenth century to the present day.

I have also written a number of books for family historians. Marriage Law for Genealogists (Takeaway, 2012) examines how, when, why and where our ancestors married, while Divorced, Bigamist, Bereaved? (Takeaway 2015) examines second marriages (some legal, some not). A Noble Affair: The Remarkable True Story of the Runaway Wife, the Bigamous Earl, and the Farmer's Daughter (Takeaway, 2013), written with Joanne Bailey and Julie Shaffer, tells the story of Henry Cecil, 10th Earl of Exeter, and his rather colourful marital history, while The Rights and Wrongs of Royal Marriage: How the law has led to heartbreak, farce and confusion and why it must be changed (Takeaway, 2011) examines the special rules that apply to the marriages of members of the Royal Family.

I welcome applications from research students in any area of contemporary family law or its history, and particularly in areas concerning marriage, cohabitation and bigamy. I am currently supervising the following PhD students:

Professor Rebecca Probert is recognised as a leading authority on marriage and its relation to family history and genealogy.She has given talks at over 100 events focused on family or local history, including the Register of Qualified Genealogists inaugural conference in 2018 and workshops at the Society of Genealogists and the National Archives. She is regularly commissioned to write articles and provide answers to readers’ queries in the leading genealogy magazine Who Do You Think You Are?and has also written for Discover Your Ancestors, Family Tree, BBC History Magazineand numerous local family history publications. She has appeared a number of times on the popular BBC series Who Do You Think You Are?, drawing on her research into the law relating to bigamy and divorce to provide advice to Kim Cattrall, Martin Shaw, Maggie Beer and Olivia Colman on their ancestors’ legal entanglements. She has also appeared on A House Through Time, Historic Houses, Harlots, Heroines and Housewives, and Heirhunters.

She also contributed to the Channel 4 documentary, The Truth About Muslim Marriages(21 November 2017). In the programme she explained how the current law evolved and in fact applies the same rules to Muslim marriages as to other non-Anglican marriages, Jewish and Quaker marriages alone being treated differently. She has engaged with policy-makers on the issue of marriage law reform and is currently seconded to the Law Commission to work on their Weddings Project.

Rebecca Probert read jurisprudence at Oxford and then worked as a Research Assistant at the Law Commission for two years before studying for an LLM at University College, London. She subsequently taught at the Universities of Aberystwyth (1997-99), Sussex (1999-2002) and Warwick (2002-17) before joining Exeter Law School in April 2017.

She convened the family law section of the Society of Legal Scholars from 2009-12 and edited the Society's newsletter, The Reporter, from 2011-2015. In 2019-20 she was President of the Society and organised the Society's first-ever virtual conference in September 2020, with over 550 delegates from across the world.

In 2014 she received the British Association for Local History's Publication Award for '"A Banbury Story": cohabitation and marriage among the Victorian poor in "notorious Neithrop"' (2012) 19(1) Cake and Cockhorse 2-17, and in 2018 she was awarded the SLS Best Paper Prize for 'R v Hall and the changing perceptions of the crime of bigamy', subsequently published in (2019) 39(1) Legal Studies 1-17.