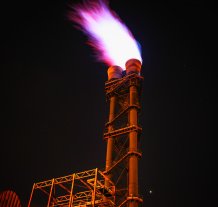 Legislation is failing to end gas flaring in Nigeria which is harming the environment and people’s health, a new study warns.

Legal penalties for oil companies are ineffective and are not weighty enough to be a deterrent, making it cheaper and easier to pollute air and water.

An expert has warned legislative loopholes that give the government discretionary powers to grant gas flaring permits corruption and can be abused by the oil companies.

Nigeria currently contributes significantly to the total amount of greenhouse gases produced in Africa through emissions from its oil and gas industry in the Niger Delta.

The study, by Dr Urenmisan Afinotan from the University of Exeter Law School, shows how efforts to stop gas flaring in the Niger Delta from the 1960s till date have been superficial because they include weak penalties, convenient loopholes and the granting of wide discretion to the Minister of Petroleum and seem to be driven by economic gains and not climate change considerations.

Judicial attempts at combating climate change through the stopping of gas flaring have yielded better results. However, the judicial posture of the courts in Nigeria still seem to favour the economic interests of the government over climate change considerations.

Gas flares are produced when the extra gases from crude oil drilling and production processes are burned off into the atmosphere. Nigeria is a significant contributor to approximately 65 per cent of the total amount of gas flared globally, flaring about 60 per cent of its associated gas, effectively placing it as the country with the worst record of gas flaring in the world.

There have been a few regulatory attempts to stop gas flaring in the Niger Delta communities since 1969. Most recently the Petroleum Industry Act (PIA), 2021) said oil companies with oil prospecting licences and leases should submit a viable feasibility study for associated gas utilization within five years of commencing operations. This failed to discourage gas flaring before the preparation of the feasibility study or impose penalties for gas flaring before and after submission of the study. This invariably meant that oil companies were free to flare gas, without any penalties, for five years.

The Associated Gas Re-Injection Act (AGRA) gives the Minister of Petroleum discretion to permit the flaring of gas where they believe re-injection or utilization of the gas is unfeasible. This left the door open for the oil companies to corruptly obtain gas flaring permits and licences.

The Associated Gas Re-Injection (Continued Flaring of Gas) Regulations (AGRA Regulations) permitted gas flaring under certain conditions and prescribed absurdly low fines that made it more economically viable for the oil companies to flare associated gas rather than re-injecting it or utilizing it. These conditions or exemptions automatically exempted about 86 out of a possible 155 oil fields owned by the multinational oil companies, from regulations or the penalties. The AGRA Regulations failed to have any impact in the cessation of gas flaring and utilization or re-injection of gas.

Even though it has been reported that the percentage of gas flared in Nigeria has reduced since 2002 and now stands at 10 percent as of 2018 there are reports of new gas flaring sites being constructed by oil companies like Shell, on oil fields in the Niger Delta since 2013.

Nigeria’s new National Gas Policy (NGP) aimed to end gas flaring by the year 2030. Associated regulation provides a legal framework for the protection of the Niger Delta communities and the broader Nigerian environment from the deleterious effects of gas flaring and climate change. It also has the potential to help derive social and economic benefits from associated gas which would normally be flared and wasted during oil production. The regulations empower the Federal Government to appropriate all flare gas held by oil producing companies that hold oil prospecting licences, leases and marginal fields.

“Only time will tell, especially when the courts are called upon to interpret the provisions of the Regulation. Gas flaring is still a daily occurrence in the Niger Delta.”

The Petroleum Industry Act - passed into law in August 2021 after more than a decade of legislative stalling - does not unequivocally proscribe gas flaring but requires oil field operators to submit a ‘natural gas flare elimination and monetisation plan’ within 12 months of securing a license to operate. Gas flaring is still permitted albeit under certain conditions. This has been regarded as another half-hearted attempt to stop gas flaring in Nigeria.

The study analyses recent oil-related cases heard by the Nigerian judiciary which have prioritised the economic benefits and interests of the deleterious oil and gas industry over the negative effects the industry has on the environment and the lives of the inhabitants of the host communities.