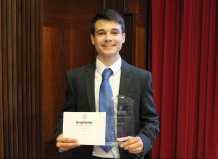 Joel Wish, a current law undergraduate, has recently won a prestigious mentoring award in his final year of studying law at University, in relation to his role of e-mentor on the Pathways to Law programme. This award was presented by the Chief Executive of Brightside, Anand Shukla, at a prestigious ceremony in London on 5 July 2017, which was also attended by the Rt. Hon Hazel Blears who provided an inspiring keynote speech during the ceremony.

Joel won this award in recognition of his e-mentoring efforts and his commitment to many outreach projects that The Sutton Trust manages, such as Pathways to Law, and Pathways Plus, an outreach programme specifically aimed at law students to support them in the first two years of their undergraduate studies.

Joel says of the Award: “As a previous Pathways to Law graduate and someone that has stayed involved with the Sutton Trust’s network of programmes, it’s a personal privilege to give back to an organisation that is continuing to support me. I’ve been a Pathways to Law mentor for two years now and have thoroughly enjoyed volunteering my time for the brilliant programme. I am responsible for chaperoning students in academic sessions, trips and maintaining contact with several prospective law students through an online portal. Equally, it’s been a personally rewarding journey watching them become confident and determined students. Since the recent cohort’s graduation, 29 of the 30 students have secured offers for higher education with many of them still wanting to pursue law.”

His mentee commented on Joel’s help and support: "He helped me decide what I should do for my future. He advised me on how to make the decision for me. Joel helped by explaining the pros and cons of going to university and working my way up through a job. The most helpful thing about mentoring is that they were always there to help you as I didn’t have anyone with any experience of university life.”

Kate Blackmore, Pathways to Law Co-ordinator at the University commented on Joel’s positive attitude and total commitment to his students: “ It was evident that Joel’s previous experience as a Pathways to Law student himself meant that he had a good idea of how to support students in the future himself. His genuine dedication to his mentor responsibilities and his mentees was admirable and he was always volunteering to help with additional pathways to law events, such as the graduation ceremony and welcoming of new students on the programme. I am so delighted that he won this award, of which he thoroughly deserves.”

The Pathways to Law programme is a national project which aims to inspire and support high achieving students from non-privileged backgrounds who are interested in pursuing a career in law. Pathways to law is currently delivered through a network of 12 universities across the UK, including Exeter, with support from over 30 law firms, including Allen & Overy, Clifford Chance, DLA Piper, Eversheds, Hogan Lovells, Linklaters and Mayer Brown.

To find out more about Joel, visit his Pathways to Law profile.