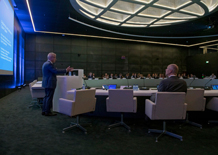 The anniversary event, sponsored by the Dutch Ministries of Foreign Affairs and Defense, was attended by diplomats, senior military officers, other government officials and academics. Speakers examined the impact of the Manual on diplomatic efforts to craft norms for cyberspace, as well as the applicability of international humanitarian law to cyber operations occurring during armed conflicts. The seminar was opened by His Excellency Foreign Minister Stef Blok, who labelled the Manual an “indispensable set of instructions for state behaviour in cyberspace”. He also used the occasion to announce a Dutch initiative to strengthen cyber diplomacy with extra funds and dedicated cyber diplomats. The event was closed by Minister of Defence, Her Excellency Ank Bijleveld, who likewise praised the project and emphasized the importance of applying international law to cyber operations conducted by and against states. Today, the Tallinn Manual 2.0 sits on the desk of every government legal adviser dealing with cyber matters. The global impact of the Manual continues with a global cyber law capacity-building program that trains officials who deal with cyber affairs legal, policy and operational issues. The courses, sponsored by the Dutch Ministry of Foreign Affairs, are directed by Professor Schmitt and have been held in Tallinn, Bogota, Santiago, and Singapore. Future 2018 courses are scheduled to be held in Korea, Singapore, Germany, Austria and Australia.