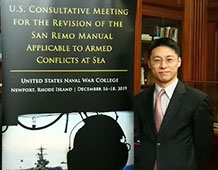 Exeter Law School’s Professor Hitoshi Nasu has recently been appointed as a Non-Resident Senior Fellow at the Stockton Centre for International Law at the United States Naval War College.

The appointment formalises the close relationship Professor Nasu has established with the Centre through participation in various research events over the last decade. Earlier this year, he contributed to an online seminar panel addressing conflict in outer space and discussed emerging issues with the development of lethal autonomous maritime systems at the US Consultative Meeting for the Revision of the San Remo Manual Application to Armed Conflict at Sea. Professor Nasu is also a regular contributor to the Stockton Centre’s journal, International Law Studies, which is the oldest international law journal in the US and one of the most influential among government legal policy makers across the globe.

Professor James Kraska, Chairman of the Stockton Centre, welcomed the appointment: ‘We are glad to have worked with Professor Nasu on numerous projects and look forward to even greater collaboration going forward’.

The appointment is for a period of two years. Professor Nasu is hoping that ‘further collaboration with the Stockton Centre will enables us to showcase University of Exeter’s excellence in legal research beyond UK shores and boost our international standing in the field of international law and security for which Exeter has become renowned’.