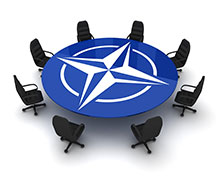 It is essential that the UK and allied nations gain a better understanding of the legal challenges posed by new methods of warfare, a University of Exeter academic has told military officers.

In recent years, armed conflicts have increasingly been fought in a “hybrid” way, where adversaries rely on a combination of conventional and non-conventional tactics to achieve their military and political objectives.

According to Dr Aurel Sari, a Senior Lecturer in Law at University of Exeter, fostering and exploiting legal uncertainty forms a key aspect of this method of warfare.

Dr Sari said: “Law and legal considerations are at the very heart of hybrid warfare. Hybrid threats are designed to exploit the grey areas and fault-lines in the law. They thrive on legal ambiguity and uncertainty; this threatens to undermine the rule of law. It is therefore imperative that we gain a better understanding of the legal dimension of hybrid warfare.”

Dr Sari was keynote speaker at ARRCADE Brief, a conference held by NATO’s Allied Rapid Reaction Corps for staff officers to discuss the challenges of hybrid warfare, earlier this month. He spoke about the legal aspects of targeting in a hybrid environment.

Hybrid threats have attracted growing attention in recent years. At their summit held in Wales in 2014, the leaders of NATO’s member states declared themselves ready to: "ensure that NATO is able to effectively address the specific challenges posed by hybrid warfare threats, where a wide range of overt and covert military, paramilitary, and civilian measures are employed in a highly integrated design.”

Earlier this year, Dr Sari convened a two-day seminar at the University of Exeter to discuss the legal challenges posed by hybrid threats and influence operations. The event, which was hosted in collaboration with the NATO Office of Legal Affairs and the Allied Rapid Reaction Corps, brought together senior legal advisors and experts from the UK and NATO partner countries.