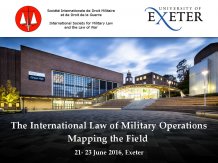 Call for Papers - The International Law of Military Operations: Mapping the Field

The International Society for Military Law and the Law of War and Exeter Law School are pleased to invite subject matter experts to submit proposals for papers to be presented at a conference on ‘The International Law of Military Operations’ to be held on 21-23 June 2016 at Exeter, United Kingdom.

The purpose of the conference is to develop our understanding of the international law of military operations from a comparative and practical perspective. The event will map the field by exploring the meaning and scope of the concept of operations law. It will also explore questions of current interest, such as the legal aspects of information operations, military deployments short of armed conflict, and the impact of human rights law. The conference will offer a unique opportunity for legal advisors and others working in the field to debate current legal challenges and to share national experiences and doctrine.

Proposals should be submitted by 8 April 2016. For further details, please refer to the call for papers and the conference website.