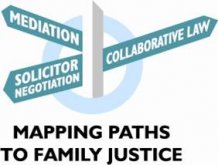 Read more about the project.

Professor Anne Barlow and Dr Janet Smithson recently presented their findings to a conference at the British Library.

Joined by Professor Rosemeary Hunter and Dr Jan Ewing (Kent University) they presented the key findings of their project Mapping Paths to Family Justice  to an audience of Family Justice Practitioners, Policy Makers and academics at a conference at the British Library on Thursday 12th June.

The 3-year study, funded by the ESRC-funded, was an interdisciplinary research project which aimed to provide much needed evidence about the awareness, usage, experience and outcomes of the principal  ‘alternative’ or ‘out of court’ Family Dispute Resolution processes of Solicitor Negotiation, Mediation and Collaborative Law. The recent withdrawal of public funding for legal advice and court representation in such cases (other than in a narrow band of situations) has increased the relevance, importance and topical nature of this research to family policy and practice in this field.

As well as feeding into academic debates around the ‘Normal Chaos of Family Law’, the study’s findings will contribute to the government’s Task Force on Family Mediation, led by David Norgrove, of which Professor Barlow is a member.