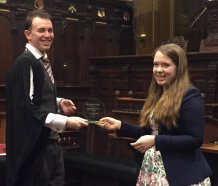 The Diamond Jubilee Moot was held on Wednesday 23 March 2016 in Exeter’s Guildhall. This show moot took place in order to commemorate the 60th anniversary of the signing of the University’s Royal Charter. The moot problem concerned questions of free movement of persons under EU law and was authored by Professor Mel Kenny.

The four participants were James Gould, Oliver Kent, Eainder Chow, and Vince Mulcock. The standard of the competition was very high, with all participants showing detailed knowledge of the law alongside professional courtroom etiquette. The moot was judged by Richard Edwards, Tia Matt, and Timon Hughes-Davies, academics at Exeter Law School.

The judges announced Vince Mulcock as the winner of the Diamond Jubilee Moot. His excellent performance in representing the appellants as the winning team of the moot was supported by James Gould.

We would like to thank everyone who made the mooting programme so successful this year, especially to Dr Kubo Mačák, Director of Mooting, as well as Meghan Bryson and Ellie Sharrock, 2015/16 Mistresses of the Moot. We hope next year’s programme will be just as successful.