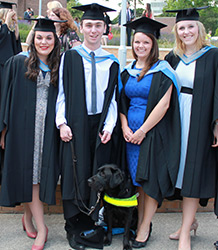 Simon Amos has graduated with a 2:1 in Law; he and his family are especially proud of his achievement as he is registered blind.  Simon credits his personal tutor, his College, the AccessAbility service and alumnus David Merkel, not to mention his new guide dog, Ronan, as contributing to his success.

He says: “Studying Law at university has been a goal I have had for as long as I can remember, so when I achieved a 2.1 from the University of Exeter, it was truly a delight.

“I am Registered Blind, and before I started university I was able to rely on my family and friends to help me get around, so the idea of using a guide dog or long cane seemed unnecessary. After my first term at Exeter, however, it became apparent to me that this was an illusion. Although I had overcome my aversion to mobility aids during Fresher’s Week by using a symbol cane, this was not sufficient. I was unable to travel from the campus to the city independently and could not rely on the people in my halls of residence in the same way as I could my friends from home.  I finally settled on the idea of getting a guide dog and was given an adorable yet mischievous black Labrador called Ronan for the start of my third year. Ronan and I are now a dynamic duo and he helped me escape from lengthy revision sessions in the law library to the pub on numerous occasions during my final year.

“I overcame many challenges caused by my disability with the support of the College of Social Sciences and the AccessAbility team at the University. I rely on all my resources being in PDF format so I can use a piece of software called Kurzweil to convert the text to speech. Although I easily accessed cases and academic articles in PDF through Westlaw, textbooks proved to be much more difficult. This is largely because publishers are restricted by copyright laws, which prevent them from easily distributing electronic copies of textbooks. Although it often took me longer to get my hands on textbooks than my sighted classmates, Michael Sanderson (my Personal Tutor) and Andrew Cunningham (my Disability Support Advisor) did a brilliant job of chasing up publishers to make sure I got the books.”

Simon is now being supported in the employment application process by David Merkel, an alumnus of the University who also has a visual impairment. David graduated with a BA in Economic History & Geography and is currently the Chairman of the Lawyers with Disabilities Division at the Law Society.   David and Simon were introduced to each other in 2010 on the recommendation of his personal tutor, Mike Sanderson.  After help from the Alumni Relations Department in making the initial connection, David has offered informal careers advice.

Simon adds: “We have developed a solid friendship and I would like to thank David for all of the time, effort and expertise he has called upon to help me during my time at Exeter as my path has not always been straightforward.  The advice and guidance he has given me has been invaluable in helping to inspire me and to focus my efforts.”

After some work experience, Simon hopes to secure a position as a paralegal, before completing the Legal Practice Course. After this he would like to embark on a training contract and qualify as a solicitor.