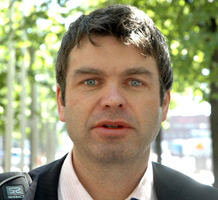 Professor Huw Williams, who is speaking to the Scottish Parliament today on the link between head injury and reoffending

A University of Exeter psychologist will today give evidence to the Justice Committee of the Scottish Parliament calling for recognition of the connection between head injury and re-offending, in order to reduce the number of individuals re-entering the criminal justice system.

Professor Huw Williams will join other academics and practitioners to give evidence as part of the committee inquiry into ‘Brain injury and the criminal justice system’  and explain what can be done to identify and treat offenders with traumatic brain injuries (TBI) and reduce reconviction rates in Scotland.

This follows research in England by Professor Williams, Associate Professor of Clinical Neuropsychology at the University of Exeter, which found that around 60% of adult and young offenders from a sample of 200 male prisoners reported having suffered a head injury at some point in their lives.

Leading neuropsychologists and forensic psychologists at the British Psychological Society (BPS) believe the problem could be widespread within Scotland’s prisons, requiring greater awareness among parents and professionals working in education and health sectors to ensure that brain injuries are spotted early.

Speaking ahead of the evidence session, Professor Williams said: “We, and colleagues internationally, consistently find that brain injury – especially when young – is linked to earlier, more violent, and repeated offending. We think that this is because the injuries tend to lead to problems in impulse control and ‘thinking ahead’ about consequences of behaviour – common issues that are found in offenders. So it is vital that we screen and manage such problems in offenders. Furthermore, if we picked up on brain injuries more effectively in children and young people, we could maybe help them to stay in school and steer them away from a future of crime.”

Jean McFarlane, Joint Chair of the British Psychological Society’s Division of Neuropsychology Scotland, added: “Existing research into this area shows that people with a traumatic brain injury are more likely to re-offend than those without. The costs of re-offending to society and individuals are substantial and more research is needed to determine the extent of this problem throughout Scotland’s criminal justice system.

“Psychologists play an important role in Scotland’s prisons, assessing and treating re-offending behaviour, but more can be done to identify high risk individuals through screening, which would prevent crime from being committed and reduce re-conviction rates.“