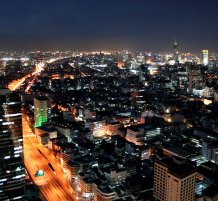 The 6th Annual Conference of the German-Southeast Asian Centre of Excellence for Public Policy and Good Governance was held at Thammasat University, Bangkok.

On 23 to 25 October Dr Skinner was invited to participate in the 6th Annual Conference of the German-Southeast Asian Centre of Excellence for Public Policy and Good Governance, based at Thammasat University, Bangkok.

Focusing on the relationships between ‘Law and Ideology’, the conference was held at the State Tower building in the Bang Rak district. Dr Skinner presented a paper entitled ‘Ideology and Criminal Law under Fascism and Democracy: Histories and Legacies’, in which he outlined some of the major themes in his on-going research into comparative criminal law in the interwar period and the complex connections between apparently distinct politico-legal orders in the penal field, including especially the relevance of these historical and ideological links today. Involving fourteen speakers from nine countries, the conference attracted an audience from across Southeast Asia.