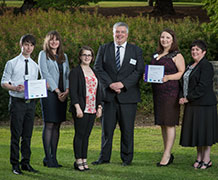 A group of high achieving sixth form students from Devon, Cornwall and Somerset, have graduated from a national project which aims to raise aspirations and the confidence of young people to pursue a career in law.

For the last two years, these sixth formers attended taster lectures on various aspects of law and legal skills workshops including mooting (legal debating) at the University in addition to field trips. Each student was assigned a University of Exeter law student as a mentor, who was able to give advice and guidance throughout the programme. Local law firms or barristers chambers such as Magdalen Chambers, Trowers & Hamlins and Ashfords plus many others provided a work experience placement, to help increase understanding of what is involved in a legal career.

Alice Hick from Cornwall College in St Austell had a placement with Foot Anstey in Plymouth. She said of the experience: “It was a real eye opener into the work that I would undertake in a commercial law firm. It gave a thorough introduction into the position of trainee solicitor, while giving valuable tips for the application process. I found that working together with fellow-minded students and with Foot Anstey's trainee solicitors made the placement especially enjoyable and not as daunting as one might expect. The placement has allowed me to consider progressing into the profession after reading Law at university.”

She added: “It was a truly invaluable programme, having had little access to the legal profession beforehand and having felt sheltered geographically from other opportunities. I cannot praise Pathways to Law highly enough and Exeter, it’s been a brilliant two years and I very much hope to continue onto Pathways Plus.”

The sixth form students also had the opportunity to visit local law courts and the Inner Temple in London; as well attending the national Pathways to Law conference, bringing together other students from across the country involved in the scheme.

Pathways to Law is run by the Sutton Trust, funded by the Legal Education Foundation and the programme is offered by 12 UK universities, including the University of Exeter.

Kathryn Davies, the Programmes Manager for The Sutton Trust said: “Pathways to Law was set up in 2006 to inspire and support academically able students in year 12 and 13 from non-privileged backgrounds interested in a career in law. Over 2,000 students have benefited to date, and the programme has had a great impact, with around 65% of our alumni going on to study Law at university. We were delighted when Exeter joined the programme in 2013, and have been impressed by the dedication and enthusiasm their students have shown.”

Professor James Devenney, Head of the Law School at the University of Exeter, praised the involvement of Exeter Law School’s alumni and friends who were actively engaged in the programme.  The participants and student mentors were complimented for their exceptionally positive attitude and approach. In addition to expressing his thanks to the legal firms which assisted with the programme, Professor Devenney said: “We are absolutely delighted to be part of this truly transformative programme.  It has been a real pleasure and privilege to welcome these exceptionally talented sixth-formers to the Law School and we look forward to learning about their future successes”.