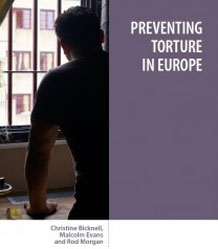 In December 2018 the Council of Europe published Dr Christine Bicknell’s co-authored book on the prevention of torture in the Council of Europe. The book, entitled Preventing Torture in Europe and co-authored with Professor Sir Malcolm Evans and Professor Rod Morgan, provides a comprehensive insight into the work of the European Committee for the Prevention of Torture.

The purpose of this book is twofold. In the first part, the authors explain the background and origins of the CPT, its membership and modus operandi, as well as how it interacts with other bodies, such as the UN’s Subcommittee on Prevention of Torture (SPT) and the national preventive mechanisms (NPMs). In the second part, the authors describe the CPT’s key findings and standards in the main situations of deprivation of liberty (police, prison, immigration detention, mental health and social care). In a detailed appendix, the authors provide summaries of the key CPT findings for the 47 states on which it reported. The book has already been cited in Court in a UK extradition case.