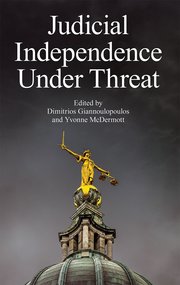 Stephen Skinner publishes chapter on threats to the rule of law

Stephen Skinner has published a chapter entitled ‘Identifying Dangers to Democracy: Fascism, the Rule of Law and the Relevance of History’ in Dimitrios Giannoulopoulos and Yvonne McDermott (eds), Judicial Independence Under Threat (Proceedings of the British Academy/OUP, 2022). The chapter reflects on significant features of law and the legal system under Italian Fascism during the interwar period and how these historical examples of anti-democratic practices can be used to identify warning signs in current political attitudes and discourse. The chapter, which is based on a paper first presented at a British Academy workshop in London in 2018, considers the apparent echoes of the totalitarian past in populist attacks on constitutionalism and the rule of law. Outlining its historical examples and engaging with recent debates about populism and autocracy, it focuses on the dangers of emphasising governmental power, the rejection or even vilification of rights, and the predominance of a discourse of violence.