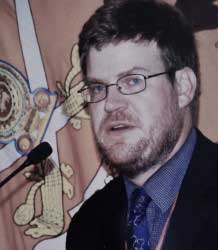 In 1984 Joseph Beuys, an artist who continually challenged the boundaries of art, suggested that the process of making a copyright work should be separated from the process of commercial exploitation. Beuys' argument was founded upon the social three-folding theory as posited by economist Rudolf Steiner, a theory which advocates a separation of the cultural-spiritual life, the economic life and political life of rights.

This project focuses on how the aspects of the cultural-spiritual life and the economic life are confused within copyrights' traditional proprietary dialogue, and how this is harming that proprietary dialogue. That dialogue is failing in relation to the areas of inter alia democratic and meritocratic entitlement, because the nature and depth of the relationship between culture and economics has become clearer due to technological change. If dialogue within the realm of copyright is to remain efficacious, there is a need to consider culture independently from economics.