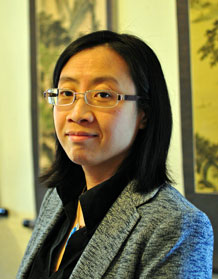 Gar Yein is currently working with Karen McAuliffe on her LLEJC: Law and Language at the ECJ project.

She is an Independent Researcher in the field of Judicial Studies, with particular focus on court and justice management, public law, and procedural law particularly at the intersection between law and technology, from a comparative perspective.

Gar Yein's other current research projects are for the Organization for Security and Cooperation in Europe, Office for Democratic Institutions and Human Rights, and for the Council of Europe, Commission for the Efficiency of justice

Gar Yein's most recent publications cover issues of cross-border procedures and the application of online solutions, the training of judges and the role of judges vis-a-vis the legislator from a comparative perspective.

Gar Yein has held academic posts at Central European University, Budapest, Hungary, Universities of Maastricht and Utrecht in the Netherlands, and the University of Passau, Germany. She has taught broadly comparative law in the fields of constitutional law and human rights, and has taught a range of English law subjects, and French constitutional law.

Presented the project in light of fair trial right standards in the first project meeting;

I conducted two simulation case studies for the project, looking at how European Small Claims Online operated in Italy for someone suing from outside of Italy.

2) Menu for Justice (Life Long Learning): project to develop and European syllabus for judicial training. Network of 50 partners, organised by University of Bologna and supported by IRSIG-CNR (completed 2012). (see publications list for output)

Task force coordinator for the “Doctoral syllabus” part (until 2011),

My role was to gather data on legal education and training of judges in Hungary.

3) “Quality management in courts and in the judicial organisations in 8 Council of Europe member States - CEPEJ Studies No. 13”  Organised by CEPEJ, managed by Philip Langbroek, University of Utrecht. (see publications list for output)

Conducted research and wrote about the Dutch judicial organisation 2006

Educated at the Universitys of Central England (now Birmingham City), and Maastricht. She holds an LLB (hons) in English law, LLM in International and Comparative law, and a PhD Quality of Judicial Organisation and Checks and Balances from University of Utrecht, the Netherlands.